Sing to the World 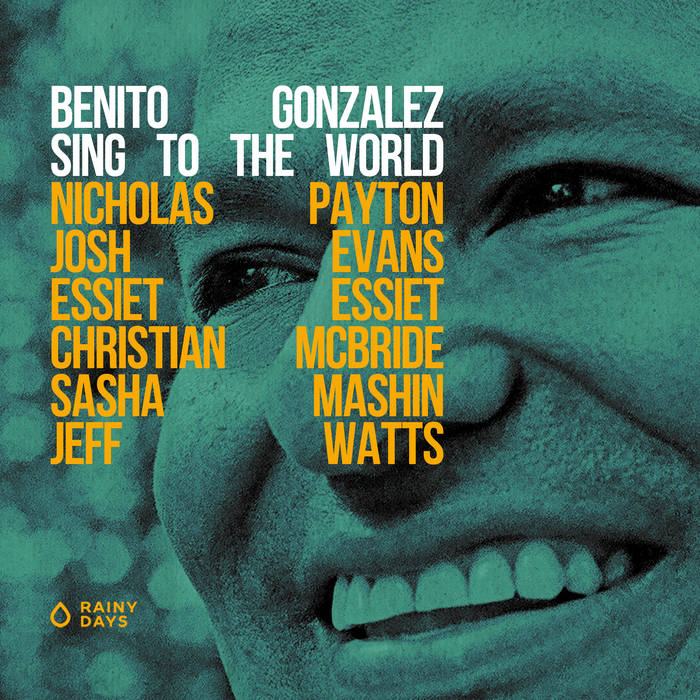 "Born in Venezuela, the 2005 Great American Piano Competition winner, now in his mid-40s, is a force, someone who frequently draws from the School of Percussive Pianists.” — Columbia Daily Tribune

SAVE THE DATE: 1st single is out April, 9

With propulsive pulse and Afro-Latin percussive drive, Benito Gonzalez places rhythm at the core of his exhilarating new album, Sing to the World, set for a May 14 release. All of the ten songs on his fifth album, and first released on the St. Petersburg, Russia label Rainy Days Records, combine to create a sense of wonder and enchantment as Gonzalez takes a stellar step into the future of his jazz journey. He’s assembled an impressive team of collaborators, including Christian McBride, Essiet Okon Essiet, Jeff “Tain” Watts, and Nicholas Payton as well as rising stars Russian drummer Sasha Mashin, trumpeter Josh Evans and saxophonist Makar Kashitsyn.

Sing to The World is a musical exploration of the concept of freedom that recognizes the dignity of us all as individuals. Music is the most powerful tool we have to make a change in the world, uniting as one outside of cultural or religious differences. We are living in a world where all are searching for freedom because its inherently valuable role in human progress. Sing to the World is about this universal search for freedom, about being present, being aware, and trying to allow the moment to come to us. The title track of Sing to the World, with its harmonic invention and pianistic power, is influenced by two McCoy Tyner tunes, “Fly with the Wind” and “Song of the New World.” “McCoy played with so much energy and with such a depth of harmony. If you hear that kind of harmony, you can push the music to its limit. It’s open to infinity. That’s my concept for the whole album—play with openness and trust. That’s what I want to give to the world,” says Gonzalez. As for enlisting jazz powerhouses in the new album, Gonzalez says McBride and Watts embrace the rhythmic core. “They hear the way I perceive the music. They understand where I’m coming from and execute brilliantly. I like strong beats rooted in Africa which is where my father’s ancestors came from. I like it when people dance to this music. Tain and Christian come from the same place. You can hear the dance beats when they play,” says Gonzalez. "The African sensibility and relationship with the drums has usually permeated the best of jazz and American music. Benito embraces that language as part of his commitment to the spiritual, healing part of the music. As a drummer, it's really fun to play with and bounce off of, in order to get to a vibration that's vital and always in style." explains Watts. As for bringing Payton on board, Gonzalez says, “Nicholas is the best trumpet player today, and I thought he would be a great addition for my album giving his direction in the music,” says Gonzalez.

Highlights on Sing to the World include Gonzalez’s dazzle of keys on “Sounds of Freedom” which he says is inspired by “the troubling situations in our world today. People are looking for freedom in places like my home Venezuela, in Russia, the U.S. People are searching, fighting for freedom,” says Gonzalez. Others include “Views of the Blues,” an energized outing inspired by Coltrane’s opensound sensibility of playing the blues, and the moving, lyrical “Offering,” featuring a terrific McBride solo. “When I was seven years old in Venezuela, I played the organ at church. I was playing beautiful melodies. This song is based on that. It’s not a hymn but a reminder of the hymns I played as a kid. It’s a story. It’s my interpretation of that period in my life,” says Gonzalez. In addition to his slow-to-upbeat originals, Gonzalez adds to the set list two compositions that have never been recorded by their composers: Roy Hargrove’s soulful “Father”and Jeff “Tain” Watt’s beauty “412.” Benito singles out ”Father” as one of his favorite songs on the album. “It’s about my personal relationship to Roy. In 2006, we attended jam sessions every Thursday night. He sat down at the piano one night and
taught me the changes to this song. We played it often, but he never recorded it” he says. As for the Tain tune, Gonzalez learned it when the two were both teaching summer jazz camp at the New Jersey Performing Arts Center (NJPAC ). "Having known Benito for years, it's been a pleasure to witness both his growth, and his love and respect for the music in notes and spirit. His seriousness and focus were apparent years ago in the
young man I'd chat with during trips; always friendly and seeking, never pushy. I'm proud to see him today as a bright light and leader in the music" says Watts. “I was messing around on the piano one day, and Tain gave me the chart. I’ve always loved this ballad. He’s played it on occasion but never recorded it,” says Gonzalez about “412.” What’s impressive about Gonzalez is that he’s not willing to sit still for too long. He’s already got future projects in mind. Recently named a Steinway & Sons artist in 2020, emerging piano talent Benito Gonzalez continues to reveals himself as an inspired and versatile artist on his fifth album, Sing to the World.

Benito Gonzalez was born in Maracaibo, Venezuela to folk musician parents who played traditional Venezuelan music. It became embedded in their son’s rhythmic sensibility. As a youngster Gonzalez played the guitar, drums and organ at church. It wasn’t until someone gave him a cassette of John Coltrane’s Afro Blue that he discovered Tyner and decided to become a pianist. “I knew I couldn’t play like that, but I identified with him. I started studying hard. I went to college, but I quit because of the music. I practiced for endless hours—10 to 12 hours a day,” says Gonzales. When Gonzalez moved from his hometown to the national capital Caracas, he tuned into the only local radio station for jazz and discovered the music of Herbie Hancock, Chick Corea and Keith Jarrett, among others. But he also plunged into his country’s unique music styles. He played with master musicians like Jose Velasquez who was the bass player for the legendary pianist Aldemaro Romero—who contributing to increased visibility of innovative Venezuelan music on the international scene with the onda nueva (new wave) rhythm derived from joropo and bossa nova.
Gonzalez made his way to U.S. by a serendipitous route when an American cultural ambassador caught one of his trio gigs and later invited him to come to Washington, D.C. to play shows with Ghanaian master drummer Okyerema Asante that led to a recording. “After my first six months here, I decided to stay in this country to learn the music right. I was seeing shows by McCoy, Bruce Barth and Gonzalo Rubalcaba and
others and falling in love with jazz on a whole new level,” Gonzalez says.
Gonzalez went on to play with Jackie McLean in 2003, then joined Kenny Garrett’s quartet for seven years until 2013—during which time he garnered two GRAMMY®- Award band nominations for the saxophonist’s albums Seeds from the Underground and Pushing the World Away. During this time Gonzalez started recording his own albums, including Starting Point (2004) and Circles (2010), then continuing his solo career with Dream Rhapsody (2015) with Slavic flutist/vocalist Sisa Michalidesová, and the Tyner project Passion Reverence Transcendence (2018). After his stint with
Garrett, he played with saxophonist Azar Lawrence’s band then in 2019 was enlisted by saxophone legend Pharoah Sanders to be his pianist/musical director.