The Doors Are Open 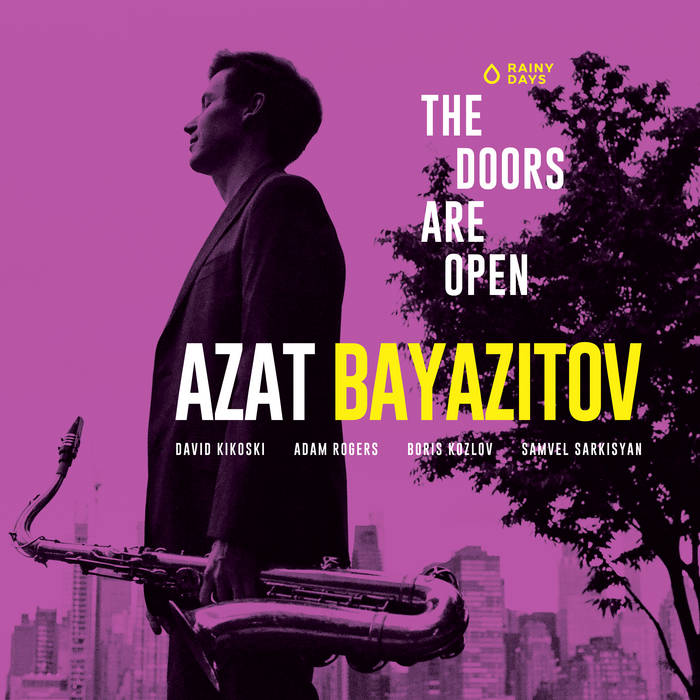 "This is a delightful project and I enjoyed the addition of Adam Rogers on guitar with the driving drums of Samvel Sarkisyan powerfully present throughout. These arrangements give each player a time to shine in the revolving spotlight."

"...the Redman influence is strongest, but the leader's personality still shines thru."

"The Doors Are Open is full of lively music, inviting the listener in."

With the release of The Doors Are Open, Rainy Days Records proudly presents the powerful musical vision of the virtuoso Russian tenor saxophonist Azat Bayazitov.

Recorded in May 2019 in New York City, it comprises eight programmatic originals that spur Bayazitov, 32, to tell vivid, impassioned stories with an unfettered imagination, no-limits technique, and heroic sound. Matching him in expressivity and chops on this paean to free expression is a multi-generational, world-class quintet — veteran jazz masters David Kikoski on piano, Adam Rogers on guitar, and Boris Kozlov on bass, propelled by on-the-rise 24-year-old Russian drummer Samvel Sarkisyan.

The Doors Are Open is Bayazitov’s second album, five years after the release of If You Still Trust, recorded early during his tenure with Russian impresario Igor Butman’s world-class Moscow Jazz Orchestra, which Bayazitov joined in 2014 and left in January 2017, when he relocated to New York City, where he’s lived and worked ever since.

“I dreamed of coming to New York even before I started listening to jazz when I was 13 or 14,” says Bayazitov, who grew up in Kazan in Russia’s Tatarstan province. “Partly it was from pictures and movies, and I’m also a fan of skyscrapers, so I fell in love with the idea of moving to New York. In deciding on the title track, he continues, “I was thinking that although one can go anywhere and do anything, we still have borders — but we can open the doors. We can go outside or go inside. People have to think about how to do it. That’s jazz itself – tunes have a form that you have to follow, but you’re free to play what you want within those borders.”
The open doors metaphor inflects Bayazitov’s attitude towards his distinguished bandmates, who solo at length — and at high levels of inspiration — throughout the proceedings. “As a bandleader, I want to give freedom to musicians,” says the leader, whose first name means “free” in the Tatar language. “I don’t want to be pushy like I’m the main guy. Yes, saxophone is a solo instrument and I am a soloist, just as guitar is a solo instrument. But we are all part of the ensemble.”
 
 The leader showcases his inclusive philosophy and prodigious skills on the title track, which begins with a simple, affirmative melody that modulates harmonically and metrically through the theme statement, before Bayazitov and Rogers navigate a two-chord structure during their eloquent declamations. Similar notions mark “Magnet,” the album-opener, on which Bayazitov and Kikoski (“a straight-ahead monster”) uncork corruscating solos over a form that switches back and forth between declaratively executed funk and swing grooves.
“People with similar ideas are magnets; one feels something, and the other will feel attracted to it,” Bayazitov says. “Places also have their own energetic magnets, like New York, which is a huge magnet for me.” He elaborates on that theory by relating the gestation of “On The Other Side Of The Bridge,” composed during his first sojourn to the United States with the Moscow Jazz Orchestra. “I was sitting under the Brooklyn Bridge, watching Manhattan, thinking how near it was, and hoping to be able to move here and live a jazz life — it was so far from me at the time.”
The panoramic “Midwest Steam Locomotive” stems from Bayazitov’s second U.S. tour with the Moscow Jazz Orchestra, when he experienced the landscapes of the American heartland — the Rocky Mountains in Colorado, the black hills and badlands of South Dakota, the flat farmland of Nebraska. “I was shocked by the beauty,” Bayazitov says. “I’d dreamt about the feeling of Manhattan, but the smaller cities of the Midwest — the other America — inspired me more than New York.” He inscribes this impression by alternating between waltz and funk feels within the AABA form. “One soloist can play over the A section and another over the B section, and we can switch grooves and modulate the melody,” he says. “I always like to write experimental things.”
Bayazitov uncorks a fervent solo on “Midwest Steam Locomotive,” as he does on “The Huge Sky Of Kazan” — an evocatively soulful melody, not sentimental, but saturated with emotion — which portrays the feeling of his hometown and homeland. “Tatarstan music has a pentatonic base and a lot of grace notes — almost an Asian quality,” he says, perhaps pinpointing  the source of the bluesy-gospelly quality that infuses the notes and tones.

He’s the lone soloist on the autumnal “Long Fall,” inspired by Joe Henderson’s interpretation of Gil Evans’ classic “Miles Ahead” on the iconic 1990s CD So Near, So Far. Cushioned by Kikoski’s plush accompaniment on Fender Rhodes and Rogers’ subdued chordal interpolations, Bayazitov evokes a bittersweet aura of airy cool, tinged with melancholy but with an attitude of optimism. A similar mood comes through on “The Past,” a nostalgic, gospel-tinged love song for a girl Bayazitov knew during his teenage years. “I’m trying to remember only the good and beautiful moments from that,” he says. Kozlov’s solo demonstrates his stature as, in Bayazitov’s words, “one of the greatest Russian jazz musicians in history,” while Kikoski’s concluding solo affirms that everything’s going to be all right.

Fittingly, the album ends with “Highway To The Dreams,” another aspirational testament to the power of following your joy, a notion upon which Sarkisyan signifies with ebullient, funky grooves. “Samvel is my favorite drummer,” Bayazitov says. “I played with him many times; he knows my music well.” Sarkisyan, an Armenian-descended Russian whose recent employers include vibraphone hero Joe Locke, hails from Rostov-on-Don. Rather than study in Moscow, he moved to Groningen, Netherlands, for studies at Prince Claus Conservatoire, and then to New York City, where he and Bayazitov met.

Bayazitov’s own professional biography is as follows. Born in Kazan in January 1988, he studied violin from ages 6 to 14, when he switched to classical saxophone studies in a local music academy.“Jazz came into my life and turned everything upside-down,” he says. “Kazan is a big city but had almost nothing in jazz except a local big band playing Glenn Miller style. So I checked out recordings first.” Hearing a cassette of Joshua Redman’s Spirit Of The Moment: Live At the Village Vanguard, which he describes as “still my favorite recording,” was a transitional moment, leading him to absorb and transcribe solos by Charlie Parker, Sonny Rollins, and John Coltrane.

In 2006, Bayazitov entered Moscow’s Gnesins Academy of Music, where he studied saxophone with Alexander Oseichuk, who helped him develop his sound, and encouraged him expand his knowledge base — and ability to “play with no accent” — by transcribing Michael Brecker, Joe Henderson and Hank Mobley, among others. During the next four years, Bayazitov “tried to be and play everywhere — jam sessions, sitting-in, gigs with bands playing straight- ahead jazz and Brazilian styles.” He also took a position as artistic director of a big band in Kazan.

In 2013, Butman began hiring Bayazitov as a sub in the Moscow Jazz Orchestra; by2014 he was a full-time member. “We always worked,” Bayazitov says, noting the band’s frequent trips to the U.S. and collaborations with heavyweights like Terence Blanchard and Bob Mintzer. Also in 2013, Bayazitov shared a bandstand for the first time at a jam session with Kikoski and Seamus Blake, after the collective group Opus Five played a concert in Moscow. “From Seamus’ fat, loud, beautiful sound, I finally understood how the horn has to sound,” he says.
Once in New York, Bayazitov established close ties in the jazz community but also put his diverse experiences to good use by taking functional gigs. “If you play only jazz music, you have only jazz gigs,” he says. “But if you play all music, you’ll have all the other gigs as well. I earn money only with music. I play in rock bands. I play funk and Latin music. I play in church. It’s a huge spectrum of music that you can’t find anywhere else.”
As The Doors Are Open proceeds, you can hear all of Bayazitov’s experiences, refracted through the jazz spirit of freedom. He credits to Rainy Day Records for allowing him the space for self-expression. “I was surprised when they offered me a chance to record with the people I wanted, with the idea of mixing Russians and Americans,” he recalls. “I can say that I got exactly what I wanted from this record.”

All compositions by Azat Bayazitov.

Featured sounds by K.Spark and WIZDUMB, plus Basi joins the show to discuss his latest release.