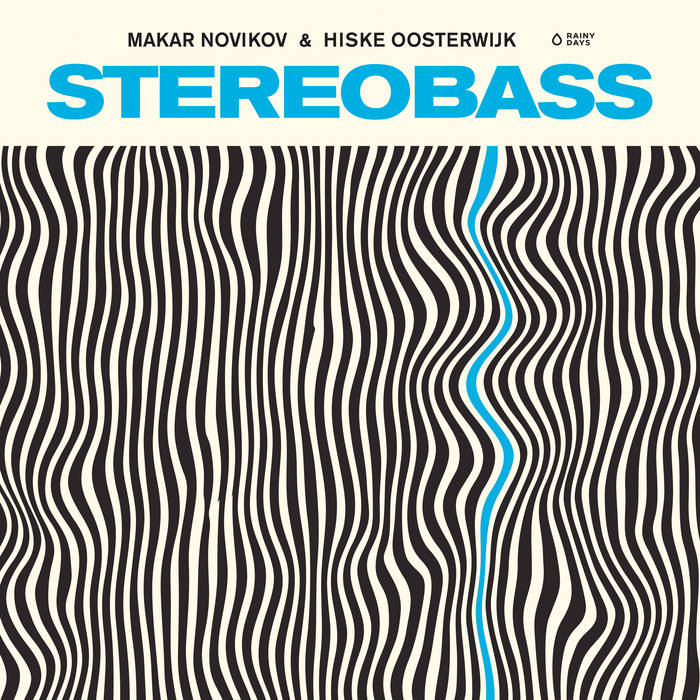 "More important is the collaboration between the singer - she sings clear and flawlessly in French, English, and Frisian - and the 4 Russian musicians.

Hiske tells her stories and the musicians play a jazzy/poppy sound of a high standard.

The 10 well-composed tracks are from the singer's hand, some with the help of another band member. Here and there magic arises.

And both bass players don't get in each others way, but enhance and support each other flawless."

For its second release, Rainy Days Records presents StereoBass, a project completely different in ambiance, orientation and context than the kinetic, modernist hardcore jazz heard on drummer Sasha Mashin’s Outside The Box, which launched the label. As implied by the title, the music revolves around Muscovite bassists Makar Novikov and Daria Chernakova, who pair off to frame the songs and melodies of Dutch vocalist Hiske Oosterwijk with a resourceful array of attacks, timbres, voicings and rhythms, complemented and inspired by pianist Alex Ivannikov’s well-conceived harmonic colors and pithy solos, and Mashin’s creative, authoritatively executed beats. As they did for Mashin’s music on Outside The Box, the protagonists illuminate Oosterwijk’s keenly observed stories and ruminations, delivered in well-turned English, French and Frisian. You could describe it as a Jazz-Alternative-Singer/Songwriter-Art Song hybrid, but the result is really, as Duke Ellington liked to say, beyond category.

The notion of StereoBass gestated around 2014 when trumpeter Alex Sipiagin asked Oosterwijk—his student in the excellent jazz program at the Prins Claus Conservatory in Groningen, Netherlands—to write and sing lyrics for a new project on which Novikov, Mashin and, more often than not, pianist Misha Tsiganov were revisiting and recontextualizing a cohort of his older compositions.

In a recent conversation, Tsiganov recalled Sipiagin telling him about Oosterwijk while on tour “somewhere in Europe.” “Alex told me, ‘She learned one of my songs and sang it,’” says Tsiganov, who emigrated to the United States from St. Petersburg in 1991. “I said, ‘No, that’s impossible.’ Alex’s tunes are extremely difficult; I would never believe someone could sing them.” In a 2016 conversation, Oosterwijk, then 26, acknowledged the challenge of making Sipiagin’s “crazy, sophisticated melodies and harmonies, big jumps, mixed meters, and fast lines not sound complicated, but rather like, ‘Oh, there’s the story.’”
Sipiagin opened his laptop and showed Tsiganov a video of Oosterwijk singing the lead on one of his pieces with a group of students. “I couldn’t believe it,” Tsiganov says. “He asked me if he should start a new project playing his music with her. I said, ‘Yes, do it because she is incredible.’ When we recorded Alex’s first New Path album, she could sing by memory the trumpet part or the saxophone part, no mistakes. In my opinion, she is one of the best singers on the planet.”

Over the course of several tours and three New Path recordings, Oosterwijk developed close friendships with Novikov and Mashin, and also Chernakova, who frequently played with Sipiagin during these years. By the spring of 2017, Oosterwijk recalls, “we were discussing that we only play together when Alex is around—‘Why not play when we want to?’ We enjoy playing together, and we have music that’s ready to be played. At first, we were hesitant about having two bass players, but we decided we’d make it work, and arrange the music to take advantage of the possibilities.”

The considerable skill sets of the bassists presented an abundance of possibilities. Novikov brings to any context experience accrued from joining Mashin on hundreds of occasions with such luminaries as James Spaulding, Lew Tabackin, Steve Slagle, Gary Smulyan, and, of course, Sipiagin. “Makar has really solid time, which is rare for Russian culture,” Mashin says. “His quarter notes connect perfectly to my quarter notes.” Tsiganov, a tough critic, encapsulates Novikov’s qualities. “He’s very flexible, creative, melodic and musical,” he says. “He’s a great sight-reader, and he can play mixed meters as easily as standards, straight-ahead music, and Latin stuff.”

If you’ve heard the final track of Outside The Box, Chernakova’s Afro-Brazilian inspired composition “Omulu Dance,” you’ve previewed the simpatico that she (left channel) and Novikov (right channel) display as StereoBass proceeds from beginning to end. Herself a graduate of Moscow’s Tchaikovsky Conservatory, Chernakova applies the calibrated touch and flawless bow technique of master classical practitioner to a sensibility informed by the will to swing—or, as Oosterwijk puts it, “to groove and pluck and have the jazz feel.”
Oosterwijk adds: “Makar plays the hell out of his bass, very musical and lyrical at the same time. When they play together, it’s like a dance. They’re not in each other’s way. They’re listening, having conversations, and enhancing each other, knowing when to play and when not to play—and how to play. It’s melody, not just a bunch of notes. For me, that’s beautiful to work with.”

“We just tried stuff, working together,” Novikov remarks. “Working together, we tried to complement each other’s strengths. During rehearsals and concerts, we found lines, exchanged ideas, and decided who would play what part.”

Oosterwijk composed the English language songs after the first StereoBass tour and decided to arrange them for the personnel. She titled “Yellow Car”—which opens both the CD and LP version s of StereoBass—for Novikov’s yellow Soviet-era vehicle “in which I’ve sat many times and even drove once—you’re driving down the road and you have no idea what’s going to happen, but you know it’s ok.” That metaphor of a speculative journey applies throughout this stimulating, adventurous date.

On “Je voudrais de voir rire,” note how the playful, ebullient unison riff and their solo exchanges after Ivannikov’s swinging post-Mehldau declamation complement Oosterwijk’s conviction that “sometimes people in a relationship can be great together, but decide to end it because they’ll be better off without each other—afterwards, when you see each other, you can ignore the other person or just accept it and smile.”

In response to the take-me-or-leave-me message of “Je suis comme je suis,” Novikov states a skronky, funky electric bass line—complemented by Chernakova’s insinuating vamp and Mashin’s ferocious backbeat—and then engages in well-wrought solo exchanges with Ivannikov that signify upon the lyric. Her spare double bass line counterpoints Novikov’s cello groove on “Un, Deux, Trois,” in which Oosterwijk, the second of three children, explores the subject of how to “how to stand out and become your own self if you’re in the middle.” The strings and Ivannikov’s vertiginous piano line represent the siblings, “free birds flying around, doing our own thing, but very close together.”

“Haut Tension” opens with a complementary melange of arco timbres and cymbal splashes (Oosterwijk calls it “the teardrop beat”) before the flow transitions to straight-eighth-land as she brings the lyric—“basically this cry, like, ‘what’s up, are we ok or not?’”—towards its anthemic emotional climax. Chernakova bridges that transition with an emotionally rich arco improvisation.

More pop-centric versions of the French language tunes can be heard on Oosterwijk’s 2016 leader album, EVA (Embrasser, Vivre, Aimer), inspired by her love for the music of Jacques Brel and other French music “when I was younger and more involved in theater.” She continues: “I love the French language—the sounds, its lyrical aspects—but I didn’t want to sing in the traditional chanson way or how other people had already done it. I started to arrange existing chansons in another jacket, so to speak, and then started to compose—that album contains only original compositions.”

A native of the province of Frisia in the northwest Netherlands, Oosterwijk researched “how to artistically compose jazz songs for the voice, based on Frisian language and poetry” when studying for her Masters Degree. One result is “Jûnbea,” which scores a night prayer by Frisian poet Gysbert Japicx; Chernakova’s heavenly bow (Oosterwijk composed the part) functions as a tone parallel to the singer. Oosterwijk adds that to enhance the sounds of the Frisian language, she “used Russian traditional vocal folk melodies as idiomatic material, as inspiration.” On “Ûnrêst” (“restlessness”), she fulfills her aspiration “to use the Frisian language on an artistic level of quality.” Novikov’s pointillistic lines and edgy solo on piccolo bass—supported by Mashin’s nuanced brushwork—complement her portrayal of a “strange, blurry light that you can’t really grasp and you start to feel heavy.”

The track that connects most palpably to the jazz tradition is “Father Time,” Oosterwijk’s regretful account (in English) of her wish to turn back the clock to correct “a mistake in love” that “made him say goodbye.” Composed to fulfill a school assignment to “write sort of a jazz standard,” it has the quality of an undiscovered Great American Songbook gem, not least because of Oosterwijk’s poetic use of reharmonized changes to “Body and Soul” within the flow.

Perhaps Oosterwijk’s path in composing “Father Time”—for a school assignment—is not so dissimilar in intention to Novikov’s usage of his aforementioned well-traveled yellow car—as a means to transport his tools of the trade to the various gigs that fill his calendar. However atavistic the yellow car’s appearance or the “Body and Soul” changes may seem on the surface, both entities serve an attitude animated by fulfilling the needs of the here-and-now. Throughout the date, the musicians eschew the same old-same old, finding fresh ways to address the various flavors in question, eliciting layers of nuance and surprise that reveal themselves with repeated listenings. “Hiske’s music is beautiful,” Novikov says. “I thought it would be interesting to do a project where she could do everything she wanted to do and could do—and she can do a lot of things.”

Mixed and Mastered by Alexander Perfilyev at Major studio, Moscow.

Featured sounds by K.Spark and WIZDUMB, plus Basi joins the show to discuss his latest release.